Discover How a Ceiling Fan Can Improve Your Home’s Airflow 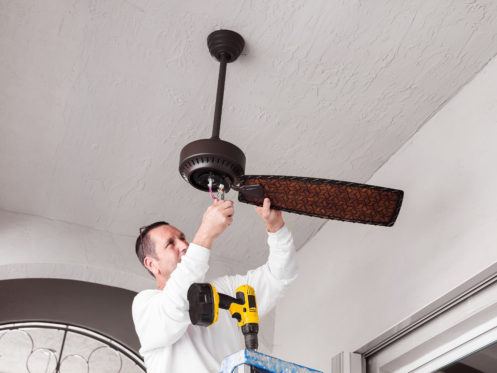 Carefully placed ceiling fans are important when it comes to the airflow within your home. These uniquely designed fans allow your home to feel cooler in the summer and warmer in the winter, even if you already have an energy efficient home. As a result, ceiling fans make it possible to keep your thermostat higher while using your air conditioner or lower when running the furnace. This lowers your energy use, which means you’ll be able to enjoy lower monthly energy bills.

Once you begin shopping for a ceiling fan, you’ll find that they’re available in several styles, colors, and sizes. Some include lights, which make them incredibly useful by serving double duty as the main light fixture in the room as well as being a way to keep you comfortable.

Many fans are designed to be turned on and off from a wall switch, and a pull chain allows you to change the speed of the blades. But modern versions often provide you with a convenient remote as well. You’ll also have the option of changing the direction of the blades. This makes it easy to keep warm air down, away from the ceiling, during the winter months and the cool air moving during the summer season.

You may think that since a ceiling fan is basically a fan mounted on the ceiling that it is supposed to cool a room, but ceiling fans aren’t designed to cool or warm a room all by themselves. They were created to improve airflow. This won’t raise or lower the temperature within your home. Instead, it circulates the air so that it is easier to regulate the temperature of each room. You’ll feel either warmer or cooler while using your ceiling fan, but this is because improved airflow enhances the effect of your air conditioner or heater.

Why Airflow is Important

You want good airflow for several reasons. When you have poor airflow within the home, the air becomes stagnant. This is dangerous to you and your family’s health, especially if you already suffer from respiratory issues such as asthma or allergies.

In addition to helping you regulate the temperature in your home, good airflow provides the following benefits:

How a Ceiling Fan Works

Ceiling fans are extremely efficient at circulating the air inside of the home. This is due to their position, but it takes more than just mounting it on the ceiling and turning it on. They shouldn’t be randomly placed. Instead, you need to put a little thought into their placement as well as the settings you use.

Ceiling fans work by creating a draft. This is done with their angled blades. The direction in which these blades turn affects the fan’s ability to help you regulate indoor temperatures. During the summer months, you want to set your ceiling fan in a counter-clockwise direction and keep the speed on low. This pulls the warm air up and re-circulates it so that the air conditioner can function better.

The opposite is true during the winter months. When it is cold outside, set your ceiling fan at a clockwise direction and turn the speed up to high. This forces that warm air that gets trapped up against the ceiling to go down. By evenly distributing the warm air, your heater will do a better job of keeping you warm.

When it comes to purchasing a ceiling fan, your first instinct will be to find one that looks good with your other home decor. But that should not be your first concern. That cute little fan you love may not be big enough to make a difference in a larger family room.

Before you begin shopping for a ceiling fan, measure the size of the room you are going to have it installed in. Small fans are ideal for bathrooms or hallways, or small bedrooms, but you need a large one for a massive living room. While the basic formula is “the larger the room, the larger the blades,” there are scientific ways to find the perfect fan.

When trying to decide which ceiling fan meets your needs best, you have to understand the difference between CFM (cubic feet per minute) and the velocity. Both of these will be listed on the ceiling fan’s box. The professionals at Tarpy Plumbing, Heating & Air will help you choose the right fans for your space.

CFM measures in cubic feet the volume of air a ceiling fan moves. The larger the fan, the more CFM it has. The measurement is taken both while the fan is running at high speed and again with it on low. The rating you see listed on the box is an average of these two readings.

Airflow velocity, on the other hand, refers to the speed at which the air moves through the fan. It’s measured in miles per hour.

The CFM and the airflow velocity measurements together will tell you how much air the ceiling fan can move and how fast. While these figures can help you understand which fan will work best in your home, keep in mind that the fan alone doesn’t heat or cool your home. The ceiling fan simply uses the hot or cold air your HVAC system creates to make you feel more comfortable.

Tips for Optimizing Airflow with a Ceiling Fan

One single ceiling fan won’t meet your airflow needs. You need several fans placed throughout the home that will complement one another’s airflow. This allows you to create a consistent temperature throughout the house. This doesn’t mean that you have to go crazy and buy a ceiling fan for every single room in the house. Instead, purchase one for each of the most used rooms.

The best airflow is achieved when the ceiling fan is six feet from the floor. There should be eight inches between your fan’s blades and the ceiling. This spacing allows the fan to circulate the air around it in as large of a volume as possible. This allows the ceiling fan to provide you with optimum recirculation of the air.

Sloped or vaulted ceilings are different. Your measurements may not be able to be precise when it comes to the fan’s placement. This is okay. You’ll find that various sizes of fans and their positions are more flexible when the ceiling slopes. This is because that slope makes it easier for the fan to create good airflow.

Tarpy Plumbing, Heating & Air can help answer all of your ceiling fan and airflow questions. We are family owned and operated with a fleet of dependable technicians. We serve San Diego and the surrounding areas with reliable HVAC services that have earned us a BBB A+ rating. In addition to helping you with your home’s indoor air quality, we’re here for all of your heating and cooling installation, repairs, and maintenance needs, as well as offering a full range of plumbing services. Contact Tarpy Plumbing, Heating & Air today for more information.